By Will Houston, Eureka Times-Standard 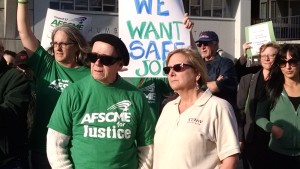 About 100 Humboldt County unionized public workers rallied in front of the Humboldt County courthouse on Tuesday afternoon to call attention to what they described as ongoing understaffing, overworking and attrition. Union workers from the American Federation of State, County and Municipal Employees (AFSCME) and several other local worker organizations gathered in front of the courthouse to protest the mounting workloads generated by a lack of adequate staffing.

AFSCME local 1684 President Timothy McDermond said that the county workers the union represents would be present to voice concerns on issues ranging from staffing and unsafe work conditions at the Department of Health and Human Services Mental Health branch to overtime for county jail employees.

“It’s not just salaries. It’s the ability to do the job the way we’re supposed to do and do it in an atmosphere that is conducive to do good work,” he said. “It’s reached a situation where the remaining workload for the remaining workers has gotten too large. It can’t be handled any more and they’re not giving the level of service the population needs, especially the mentally ill.”

The rally followed public input at the Board of Supervisor’s morning session after a proclamation was approved that proclaimed March as Social Worker Appreciation Month in the county. Union members wearing green AFSCME T-shirts during the St. Patrick’s Day meeting applauded loudly after several members of the public addressed the board regarding what they said were depleting staffing levels and increasing workloads at the Department of Health and Human Services Department’s Child Welfare Services branch as well as for other social services. Some speakers said the issue has reached a “crisis” level, alluding to a similar concern raised about the department’s Mental Health branch in February, where several staff members resigned and voiced concerns over unsafe working conditions, poor morale and mounting workloads, among other factors.

McDermond said that the end goal of the rally is to call for staffing increases to lessen the burden on existing staff in order to stem the flow of workers leaving county government.

“The inability to properly serve those people we need to serve and the fact that we don’t have a safe condition for our workers is paramount,” he said.

The story was the same for many of those waving signs in front of the courthouse and hooting in appreciation to the many honks of passing vehicles.

“I’m out here today in support of my union,” Public Health Branch employee Sue Carns said. “There’s a lot of work to be done and not enough people to do it.”

What’s often at stake, McDermond said, is not only the physical and mental health of the employees but also providing good service to the clients.

“Today, we are protesting a workload that has denigrated to such a point the safety of the employees and the safety of the community is impaired,” he said. The situation stretches from social workers to county correctional facility staff. It’s not only an issue of recruitment for the many vacancies but retaining those hired, he said.

Third District Humboldt County Supervisor Mark Lovelace, who stood on the fringes speaking with employees, said he attended to show his support for the county’s workers. In a brief address to the protestors, Lovelace thanked the employees for all their work and praised their dedication.

The much-discussed 25 percent attrition rate among the county’s social workers was particularly troubling for the supervisor.

Lovelace said the county was looking at an assortment of things to resolve the issues. Among those is a study to analyze the current structure of the Department of Health and Human Services, which includes the Social Services Branch, the Mental Health Branch and the Public Health Branch. Since the departments’ integration, there’s been only one director — Phil Crandall. As Crandall plans to retire in January 2016, it’s a good time to take a look at that structure, Lovelace said, noting that Humboldt County was one of the first to integrate departments.

“We’ll be looking at other counties that followed suit,” he said.

For some Child Welfare Services social workers, the dominant issues is retaining staff.

Noreen Edwards will have worked for county Child Welfare Services for nine years in July. She said she was hired in a group of 14 CWS workers — just four of those remain. Since beginning with CWS in 2006, Edwards said 102 co-workers have left. Others are hired and oftentimes don’t stick around.

“They’ve left because the work is too hard, they’re not supported, they’re overworked and not appreciated,” Edwards said.

Taking on additional caseloads can be difficult for Edwards, whose area includes the eastern portion of the county: Willow Creek, Hoopa, Weitchpec and Orleans. The workers are mandated to see all their clients at least once a month, she said. The bigger the caseload, the more difficult that becomes.

“For us,” CWS social worker Nathan Ask said, “the No. 1 issue is retention.” In addition to losing help with the caseload, the outflux of workers also means a loss of institutional knowledge, he said.

Others tell of a similar situation in some offices of the Public Health Branch. Beth Stephens works with California Children’s Services, providing assistance in getting diagnoses and arranging treatment for ill or injured children. When she started in 1996, there were four caseworkers, now there are just two, she said. The two caseworkers just work harder.

“We aren’t going to shortchange those families,” she said. “I, personally, would like to see people hired so it’s not so stressful for all of us in all the departments. It cannot go on. It can’t.”

A closed session item on the board’s Tuesday agenda addressed labor negotiations with several of the worker organizations present at the protest, but 2nd District Supervisor Estelle Fennell said there was no action to report out of that. McDermond said that his union has yet to submit its proposals, which are currently being drafted.

Myths and Facts about YOUR union!